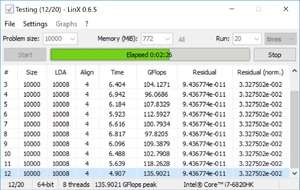 LinX is a freeware CPU benchmarking software app filed under benchmark software and made available by Alexander Gusev for Windows.

The review for LinX has not been completed yet, but it was tested by an editor here on a PC and a list of features has been compiled; see below.

If you would like to submit a review of this software download, we welcome your input and encourage you to submit us something!

LinX is designed to be a simple interface for Intel Linpack Benchmark. It checks stability of the system and can detect hardware errors. The main point of Linpack is to solve systems of linear equations. It is designed as a benchmark to test the performance of a system in GFlops - billions of floating point operation per second.

But it is also the most stressful CPU testing program to date and is a great tool to determine CPU stability.

LinX is software which can benchmark CPU speed.

This download is licensed as freeware for the Windows (32-bit and 64-bit) operating system on a laptop or desktop PC from benchmark software without restrictions. LinX 0.6.5 is available to all software users as a free download for Windows 10 PCs but also without a hitch on Windows 7 and Windows 8.

Compatibility with this CPU benchmarking software may vary, but will generally run fine under Microsoft Windows 10, Windows 8, Windows 8.1, Windows 7, Windows Vista and Windows XP on either a 32-bit or 64-bit setup. A separate x64 version may be available from Alexander Gusev.

Ranking in
Benchmarking Software
#2 of 45